The OLED display exists in 3 versions (A, B & C) with C being the most recent. The relevant similarities and differences are as follows:

The display module itself is a glass OLED screen attached to a green rectangular circuit board with a 20 pin interface header and mounting holes in each corner. A custom adapter board is mounted behind the main circuit board via the 20 pin header. The adapter board has a 14 pin header for connecting the OLED display to the preamp controller board via a ribbon cable. The adapter board also serves as the mounting point for the IR receiver module and for connecting the encoder module. All signals for the IR receiver and encoder are now routed back to the preamp controller via the single 14 pin ribbon cable.

The OLED cable is a 2×7 IDC ribbon cable that runs between the 14 pin V25.J9 OLED header and its corresponding 14 pin OLED.J2  header on the inter board of the OLED Display Module. The ribbon cable carries the following signals:

Please be careful to make sure the red stripe on the ribbon cable is on the same side of each header that has a white dot the circuit board.

Version A used a second 2×5 IDC ribbon cable to carry encoder and IR receiver signals.  This cable ran between the 10 pin V25.J3 header and the its corresponding 10 pin OLED.J3 header on the adapter board of the Rev A version of the OLED display module.

Versions B and C do not use this cable.

A rotary encoder module (with integral push button) interfaces to the preamp controller board through the OLED display module. The encoder takes the place of a conventional front panel manual volume control knob. It also provides additional functions such as muting, power on/off, and input switching.

The interface between the OLED display module and the V25 controller board is shown below but without the actual cables present. The boards shown below are both version A boards respectively. Versions B and C differ in that there’s only the one interface cable going to the J9 OLED header on the V25 and no J3 cable.

Note the 4 pin header for attaching the encoder cable. Also note the IR receiver soldered to the adapter board. 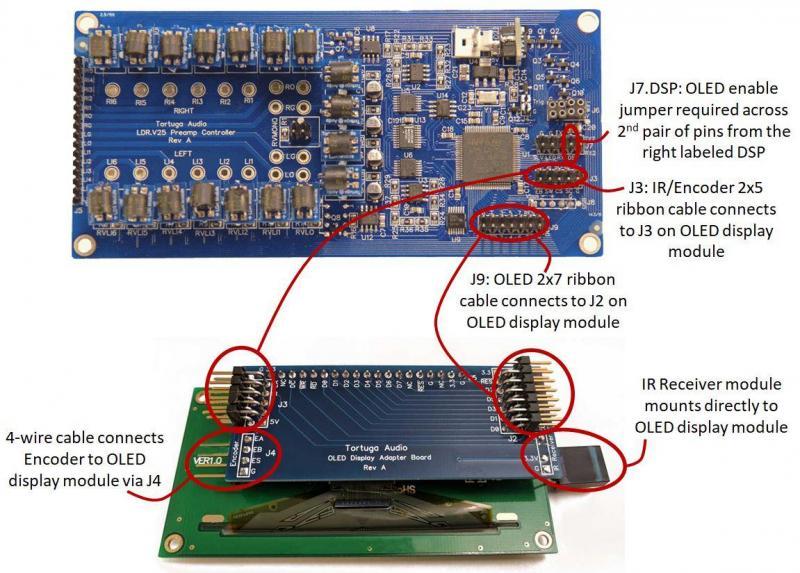