The V25 is a digitally controlled, 2 channel analog stereo passive stepped attenuator and preamp controller. Unlike most audio attenuation technology the V25 utilizes light dependent resistors (LDRs) for both attenuation and in lieu of conventional relays for input switching.

The V25 Preamp Controller (Rev A) was released in April, 2017 and subsequently 2 minor hardware revisions have been made.

Noteworthy features of the V25 include the following:

The V25 board is shown below with annotation of the key components and control interface points. Please refer to V25 Specifications section for more detail.

The V25 is powered by a nominal 12V supply (not included) which is coverted to both 5V and 3.3V for use within the board. The power drives an embedded ARM microcontroller and its interfaces with a remote control receiver, serial comm ports, trigger outputs, USB port, OLED display, and most significantly the LDRs themselves which contain light emitting diodes to modulate their vaiable resistance.

The V25 is classified as a unity gain “passive” preamp device with no active amplification or buffering of the audio signal. That means there is no direct connection to, or manipulation of, the audio signal by a power supply. Despite the sophistication of the V25 design, each audio channel signal “sees” only a voltage divider composed of 2 LDRs in a classic series/shunt L-Pad configuration that emulates a potentiometer.

There are currently 3 hardware versions of the V25 board designated as A, B and C with A being the original board as shown above. The version letter is printed on the V25 board on the left side under the name of the board.

The OLED Display Module (sold separately) is a highly interactive, easy to use, intuitive, menu driven user control interface for configuring and controlling the V25. Today, the OLED display continues to be an integral part of the interactive control of the V25 stepped attenuator and preamp controller. The V25 continues to also be capable of driving a pair of Tortuga Audio’s legacy dual 2 digit 7-segment display modules.

The OLED display connects to the V25 via a 14 pin ribbon cable to the V25.J9 header.

Please refer to a separate document on the OLED display for more detail on its interface.

The V25 is designed to allow multiple V25 boards to be daisy-chained together for multi-channel audio. Here are the characteristics of the V25 multi-channel system: 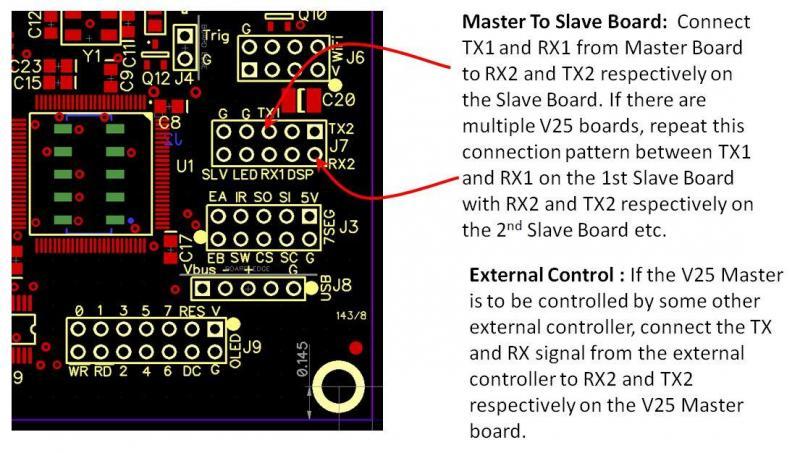 The V25 Preamp Controller Board can be controlled by interfacing it with any PC, microcontroller or programmable device that’s equipped with standard UART serial communications hardware or the equivalent in software. External UART TX and RX signals can connect to the V25  J7.RX2 and J7.TX2 pins respectively.

In order to have reliable UART communications the user should be mindful that both devices share a common ground.

The UARTs used by the V25 are part of the V25’s microcontroller. They utilize data receipt interrupts, and are considered extremely accurate and reliable. The V25 employs the following UART communications configuration.

The control commands available to an external controller are defined in the table below. Collectively these commands should allow for the comprehensive control of the V25 even in the absence of any visual feedback from the V25.

The user accepts all risks in using an external controller and commands to control their V25 controller. These commands are subject to change without notification.