The following information is for Tortuga Audio preamps based on the V25 preamp controller with the OLED display. If you have an earlier model that uses the original 7-segment display, please consult the menu for a separate section on V25 control with 7-segment display.

The Apple remote has only the 7 controls buttons as shown below. These are adequte for common control actions like turning on, muting, adjusting volume etc. More complex control actions require menu driven interaction between the remote and the visual OLED display. 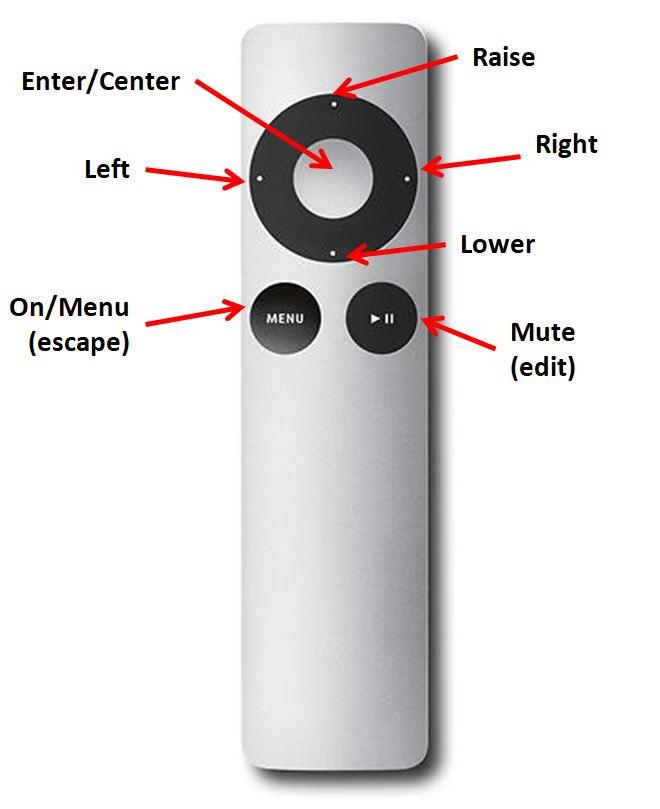 The OLED display is a 256×64 bit high contrast white-on-black graphical display. It works interactively with the Apple remote to allow more complex controls than are possible with the Apple remote alone. Being a graphic display, the OLED can display a wide range of text, numbers, lines, and images. These capabilities are used to good effect to enable the user to easily configure and control the V25 preamp controller and V25 based preamps.

The V25 control scheme is shown in the diagram below. The left hand column shows the control menu tree (list) items. These menu items are shown on the OLED display as the user scrolls up and down the menu list.

The following is a summary of how the control scheme works. 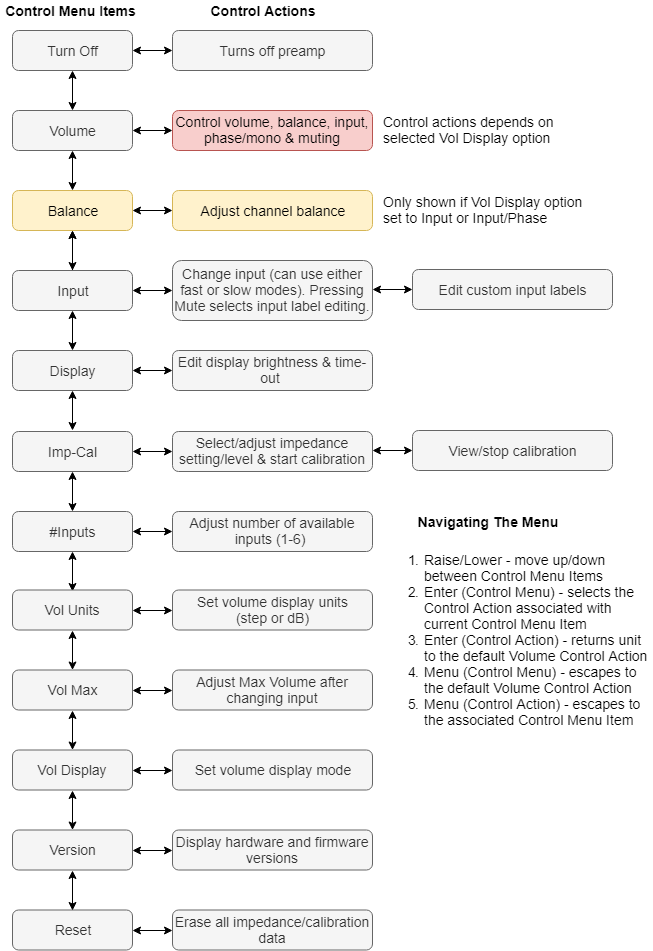 The control menu shown above is the current control menu as of firmware version 220 released on February 27, 2018. Preamps with earlier firmware will differ slightly from this menu.

Prior to the version 220 firmware release, there were separate Calibration (Cal) and Impedance (Imped) menu items.

Each menu item and control action/view in the control scheme diagram shown above are described in the accordion list below. Click on any control topic to expand and read.

Control  items below that indicate (menu) in their name relate to the navigable menu tree diagram above and are shown on the OLED display. There are controls items below that are not directly associated with a menu item or which do respond to control inputs from either/both the remote control or encoder knob.

Powering up (the "boot up")

The V25 can be turned on 2 different ways as follows:

When the preamp turns on you will see the words “Tortuga Audio” briefly displayed and then fade to black followed by the display showing the default volume control display. After any delays (depends on preamp model) the preamp will then unmute and the volume will ramp up to the level it was at when last used but in no event greater than the Max Volume setting which is user adjustable via the menu.

The V25 can be turned off two different ways as follows:

During the turn-off process the volume will ramp down to zero, the tortuga will appear briefly on the display and then fade to black. At that point the preamp is turned off and in standby.

Volume is adjustable 2 ways in the V25:

Summary of the information, controls and related options available in the volume control action/view.

Volume muting is NOT an item on the control menu per se but since it’s such a commonly used feature it gets its own section here.

You can mute/unmute the preamp with either the remote  control or the encoder.

You can switch between Stereo mode to Mono mode using the remote control. The controller operates in Stereo mode by default.

Channel balance control is available 2 different ways in the V25.

Input switching is available 3 different ways in the V25.

The Display control provides for both Brightness adjustment and display Timeout adjustment from a single control action/view.

The Imp/Cal control provides for two interrelated features: adjusting input impedance and initiating calibration of the LDRs. These are both accessed through the same Imp/Cal menu item.

Running calibration after a Reset: #

The # (number of) Inputs control allows the user to adjust the number of inputs that the preamp can switch between. The V25 can accommodate up to 6 inputs. #1 input is always the first input. If only one input is enabled it must be input #1. Enabled inputs must be sequential and can’t be skipped.

The Vol Units control allows the user to view the volume in either step number (default) or in units of dB (decibels) of attenuation.

The Vol Max control allows the user to adjust the maximum allowable initial volume associated with any of the following events:

The Vol Display control allows the user to select how certain controls work in the volume control action/view. There are 3 options to choose from as follows:

The Version info menu item provides information only. There is no control action associated with this menu item.

Please note that Reset is not a panacea or “go to” remedy for resolving problems with your preamp.

Remote pairing is a procedure to pair your V25 based preamp with a a specific Apple remote. Each Apple remote has an internal ID number between 0 and 255 (256 possible IDs) that it transmits with every command it sends. The V25 will only respond to commands from the one remote/ID number it is paired with. The pairing process teaches your V25 the ID number of your remote. It will then ignore the 255 other Apple remotes with a different ID number.

The Apple remote ID numbering scheme allows you to own multiple Apple products each responding to a different Apple remote in order to avoid conflicts. For this to work each product must be deliberately paired with a remote with a unique ID number. The Tortuga Audio V25 is no exception.

Here is the remote pairing procedure:

The LDR3000T Tube Preamp has a visible 10 second warm up timer which will count down from 10 seconds when you turn it on. During this warm up period the tube heaters will turn on and stabilize. When the timer hits 0, the tube plate voltage is switched on, the preamp’s output is unmuted, and the volume then ramps up to its previous setpoint.

We recommend the user avoid making any additional control inputs while the warm up timer is running.

The LDR300.V25 Buffered Preamp has a built-in 10 second delay (not visible on display) which disconnects (mutes) the preamp output for 10 seconds each time power is connected to the preamp. The same 10 second delay happens again each time the preamp is turned on. Therefore you may notice that even though the OLED display indicates the preamp is no longer muted after turning it on, the 10 second buffer output delay timer may still be running keeping the output muted. This is normal. The buffer output delay is there to protect against bumps and pops during power/turn on/off transitions.