We Got The OLED Out! 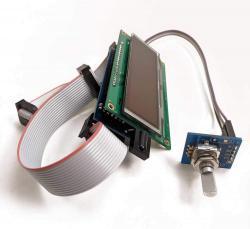 In May 2018 we released a newer and better display for our line of LDR preamps. Driven by our latest V25 Preamp Controller, the new graphic OLED display (Organic Light Emitting Diode) provides an intuitive and easy to use control interface that replaces our earlier dual, 2-digit, 7-segment displays.

You may well ask, why all the focus on a better display?  Don’t you guys just make preamps?

Sure, we make preamps. But we are always looking to make a better preamp.

Show Me The Volume

How does a new display make for a better preamp? Let’s start at the beginning.

Once upon a time back in 2012 we came out with our first LDR Passive Preamp, the LDR6.  It had a remote, a control knob, and a blinking LED. There was no display. We called it good and it was.

And then the customer feedback started. We received several suggestions for improving our initial offering including adding some form of visual feedback so users could tell what volume level they were at.

I value customer feedback and use it to guide our product development. Clearly, it wasn’t enough that they could hear the volume.  Customers were saying, show me the volume!

It took a while but we eventually came out with our first volume display that used the ubiquitous old-school 7-segment LED display. How old is this old-school display technology you ask? Check out this quote from wikipedia.

Seven-segment representation of figures can be found in patents as early as 1903 (in U.S. Patent 1,126,641), when Carl Kinsley invented a method of telegraphically transmitting letters and numbers and having them printed on tape in a segmented format. In 1908, F. W. Wood invented an 8-segment display, which displayed the number 4 using a diagonal bar (U.S. Patent 974,943). In 1910, a seven-segment display illuminated by incandescent bulbs was used on a power-plant boiler room signal panel.[10] They were also used to show the dialed telephone number to operators during the transition from manual to automatic telephone dialing.[11] They did not achieve widespread use until the advent of LEDs in the 1970s.

Old-school indeed yet 7-segment displays are rock solid performers that get the job done of showing…..numbers.  And decimal points. But that’s it. No text. No symbols. No graphics. But if all you need to show someone is a number, 7-segment displays get it done.

In the beginning that was all we asked of our new display – show me the volume. And it was good.

There’s an old saw that goes…”If it ain’t broke, don’t fix it.”  I’ve never liked that saying. I’ll see your old saw and raise you one Bob Dylan…”He not busy being born is busy dying.”

And so, over time, we’ve been adding  and evolving capabilities and features to our preamps and asking more and more of our simple 7-segment display.

Before the OLED display, most of these were organized into control “modes” that required the user to change the “mode” of the controller which then displayed various numbers and thus enabled certain controls specific to those modes and features. The user would have to remember these modes, their sequence and what the numbers meant.

It got  complicated.  Arguably too complicated.  We realized we needed to either toss out features or find some other way to simplify the controls.

What doesn’t work well is a simple remote and a simple display especially if you have a complex set of controls.

Unfortunately, that was where we’d ended up.  Something had to to be done.

We first considered a new custom remote with several dedicated buttons for special features. This is the conventional hardware driven approach. I confess I really really don’t like complex remotes with tons of buttons. I juggle a handful of  complex remotes everyday. The thought of birthing yet another complex custom remote just didn’t sit well. They are expensive to develop. You have to buy 100’s of them at a time to get economies of scale which ties up cash. Custom remotes are very expensive and drive up price. To add insult they are out of date and inflexible the moment you freeze the design.

There was one additional option that I will acknowlege before moving on – adding manual buttons/controls to the front panel. This is a traditional approach. Plenty of little knobs and switches and maybe even meters and dials all over a front panel. Many manufacatures still do this. We don’t. It’s a digital world going forward and our intention is to live in it and make the best of it.

New display but what type?

We opted to stay with our simple Apple remote and go with a more sophisticated display. A more capable display would provide a rich interactive user experience and be able to evolve over time since it was entirely software driven.

Once the choice was made to keep the simple remote and develop a new display, the question became what type of display? There are many embedded display options available today including larger sexy color displays, various character displays, and then there are monochrome graphic OLED displays with pixel level brightness control.

We came up with numerous criteria including the following:

In the end we choose a monochrome graphic OLED display with 16 levels of pixel brightnes that had approximately a 1 inch tall by 3 inch wide viewing area.

A Ton of Programming Required

Incorporating the OLED display into our V25 preamp controller required a ton of programming. A TON! That’s a lot of code.

Why so much? When we waded into programming the OLED display we soon discovered a dearth of readily available low level software tools. What that meant is we first had to develop the low level drivers that turn text, lines and images into coherent pixel patterns that can then be transmitted to the display’s memory. Doing so was a long hard slog through the bowels of OLED display memory maps. Believe it or not, this literally took months of work before we got it just right. Then the real work started.

We decided to start from scratch and build a highly stuctured double-linked interactive menu list that could be easily modified. I won’t drag you down the coding rabbit hole to explain that but know this. Implementing this badly is easy to do. Implementing this really well is hard to do. We first had to learn to do it badly. Eventually we figured out how to do it well. We went down quite a few rabbit holes and dead ends. It was interesting and challenging work. It took a long time.

I should note that the 7-segment display code and the new OLED display code now co-exist as a single integrated program. By the time we released the updated firmware with the OLED display we had reworked a significant percentage of the existing code, added the new OLED code, and ended up doubling the overall size of compiled program that runs the V25.

Yes, It Was Worth It

During any significant product development effort, it’s not unusual to wonder from time to time if you’re on the right track and if the time, money and effort is really worth it.

Fact – we design and manufacture preamps and preamp buffers.  What matters most is do they sound good (they do!).

Fact – the OLED display doesn’t improve the sound quality of our preamps one iota.

So why did we develop the OLED display? Because it makes our preamps easier to use. Because it enhances the user experience. Because we can now add capabilities that don’t turn into liabilities.

Because with the new OLED display, we now make an even a better preamp!

You can find out more about our line of LDR preamps and related products here.