What is volume control? #

The technical term for volume control is attenuation. Attenuation is the opposite of amplification.

A light dependent resistor (LDR) is the marriage of a photoresistor with a light emitting diode (LED) in a small sealed package approximately the size of an M&M candy. Each LDR has 2 pairs of wires. One pair connects to the LED end while the second pair connect to the photoresistor end.

Inside the LDR, the LED shines light on the phtoresistor. The resistance of an LDR varies in proportion to the brightness of the LED which is in turn dependent on the amount of electrical current running through the LED. Increasing LED current increases the LED brightness which in turn reduces the the photoresistor resistance.

LDRs optically isolate the control circuitry from the audio signal passing through the photoresistor. The audio signal only encounters a variable resistance that is regulated by photons (i.e. light) and not electrons.

Why LDRs for volume control? #

We use LDRs because the resulting subjective sound quality is amazing. Adjectives like clear, open, unveiled, articulate, and uncolored all apply to the LDR. All while maintaining excellent bass and overall dynamics even in a passive preamp. 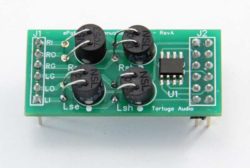 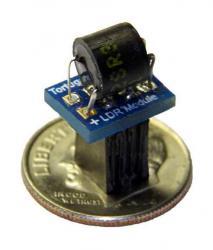 If LDRs are so great why then why don’t all preamps use LDRs? A reasonable question. Here’s why not.

Last but not least, LDRs have higher distortion characteristics than most other alternatives although not enough that it really matters subjectively (the distortion is well below human detectable levels).

For all the above reasons most audio designers have avoided taking on the challenge of using LDRs.

Tortuga Audio took on this challenge over 10 years ago and has not looked back. We overcame these technical challenges. We are now on our 5th generation LDR preamp control technology.

How do LDRs control volume? #

The Resistance Ratio (or “Ratio”) is defined by the simple formula: Ratio = Rshunt/(Rshunt + Rseries). This Ratio also happens to be the voltage ratio of Vout divided by Vin such that Vout = Vin x Ratio. A pot’s attenuation level at any point along the wiper can be expressed in decibels which is defined as 20 x log(Ratio). Putting all this together your arrive at dB = 20 x log (Vout/Vin) where Ratio = Vout/Vin = Rshunt/(Rseries + Rshunt). These are the basic governing equations of most volume control.

Volume control with LDRs works basically the same way except that with LDRs the RSeries and RShunt resistance levels can be controlled completely independent of each other. Once the LDRs are calibrated, a microcontroller can control each independent LDR to achieve the resistance ratios that correspond to specific dB attenuation levels over a wide range of volume control. While a pot does this mechanically, the resistance levels of both the series and shunt LDRs must be done electronically and may not involve any mechanical elements at all.

Repeatable and reliable electronic control of LDRs is at the core of Tortuga Audio’s LDR volume control technology.