In The Beginning It Was Already Really Good!

When we first embarked on the development of a precision digitally controlled passive preamp based on light dependent resistors (LDRs) our goal was to tame the highly variable and nonlinear LDR using the flexibility of a software based design.

A year ago we introduced the LDR6 and LDR1 passive preamps and then  this past spring we released the DIY LDR3x passive preamp controller board.

Our growing customer base has been very pleased with our LDR passive preamps and we find ourselves being followed around by a growing string of adoring adjectives with names like….clear, transparent, unveiled, articulate, high resolution, colorless, flawless, a.k.a that “LDR sound”.

Improving Impedance – When Resistance is NOT Futile

One year later we are now releasing a significant improvement to our LDR technology that can benefit both our existing and future customers.

To understand this improvement  we need a brief technical tutorial on impedance. If you’e not a techie don’t worry, this will be short, simple and painless.

A key goal of any preamplifier is to ensure the maximum transfer of energy from your audio source to your amplifier while not degrading the audio signal in the process.

Once upon a time, audio designers sought to achieve this key goal through “impedance matching”.  Impedance, often represented by the symbol “Z”,  is just another word for the resistance experience by audio signals. When everything in the signal chain resists equally (i.e. the impedances match), the musical energy can flow optimally. Bottom line: impedance matching equals better sounding audio gear.

With impedance bridging, a low Z source such as your DAC ( with Z typically < 1000 ohms) is connected to a relatively high Z load/preamp/amp  (with Z typically > 10,000  ohms ). When this bridging Z ratio is high enough (say 10:1 or greater), most of the voltage/energy coming from the music source is able to make it to the amplifier rather than getting dumped to ground.

Ok, so what does this have to do with improving on the  awesome sound of our LDR based passive preamps? 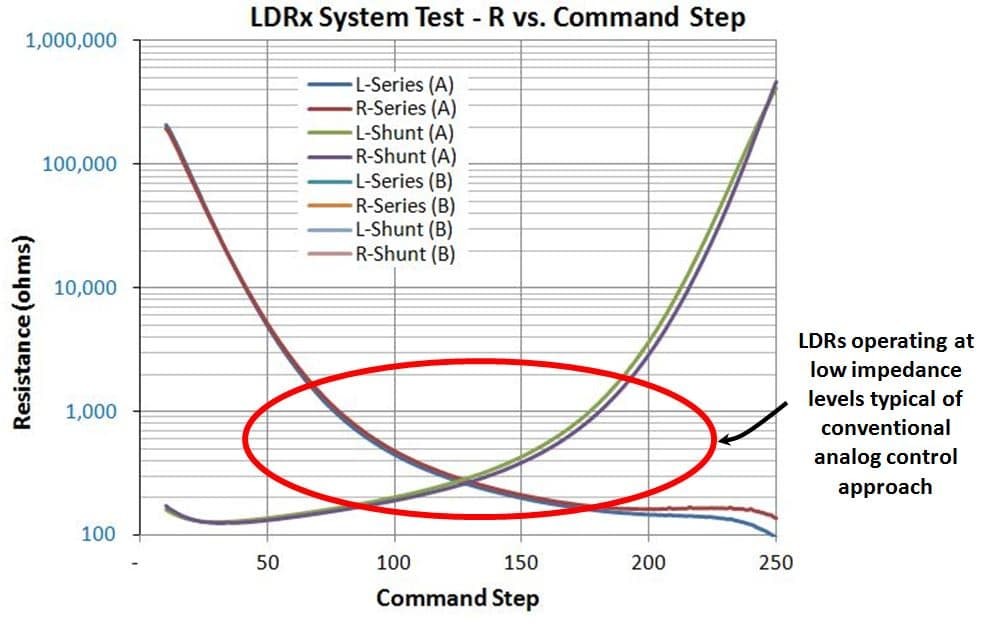 Despite the clear benefits of LDR based volume control, the typical analog  approach to controlling LDRs has historically resulted in LDR based preamps operating at very low impedance levels of below 1,000 ohms.

This is illustrated in the graphic above where we see the resistance (DC impedance) of a typical set of series/shunt LDRs plotted over their control range.  The combined series plus shunt resistance (i.e. the input impedance) falls well below 1000 ohms over much of the range and doesn’t reach reasonably high levels (10k or above) until you approach very high volume levels that occur at the far right side of the curves.

That is about to change!

No, in fact it HAS changed! All future orders of our LDR based preamp products will use our new HiZ (high impedance) control algorithm.

Since this is entirely a software based design improvement, the HiZ software is also available as an upgrade for current owners that received delivery of any of our passive preamps prior to Nov 15th, 2013.

We believe this high impedance LDR control design is unique to Tortuga Audio and wouldn’t even be possible but for Tortuga Audio’s proprietary software based digital control approach which gives us the ability to program and control the behavior of each individual LDR  through software. 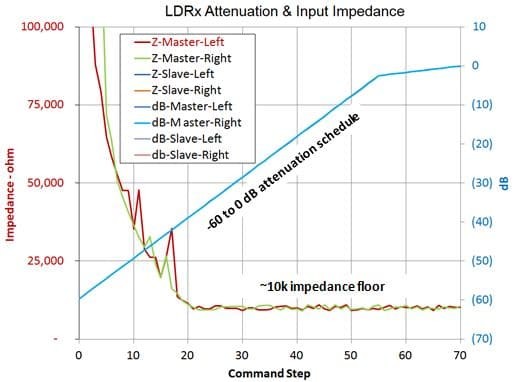 The above chart shows attenuation and input impedance curves that are typical of the new HiZ control algorithm. Using the same raw test data shown in the earlier graphic above, we apply proprietary data processing to yield a  70 step 0-60 dB attenuation schedule while keeping the input impedance at or above a nominal floor. In the above example the impedance floor is 10k ohms which is now the nominal input impedance spec for all of our LDR passive preamps.

Audio energy (loudness) doubles for every 3 dB reduction in attenuation. Thus, when you’re already REALLY loud near full volume, even a 1 dB incremental step can be jarring and feels like you’ve lost control. Our custom attenuation schedule tames this phenomena. Note that the dB schedule has a knee at 2.5 dB at step 55. From this point on, the incremental dB change per step becomes more granular up to max volume. The finer granularity of dB control step near full volume avoids large steps in sound pressure increase.