The LDR3x Preamp Controller Rev 2.F, otherwise referred to as the “V2”,  is a digitally controlled, 2 channel analog stereo passive stepped attenuator and preamp controller that was released in May 2014. The V utilizes light dependent resistors (LDRs) for attenuation. The V2 has since been superseded by the V25.

Noteworthy features of the V2 include the following: 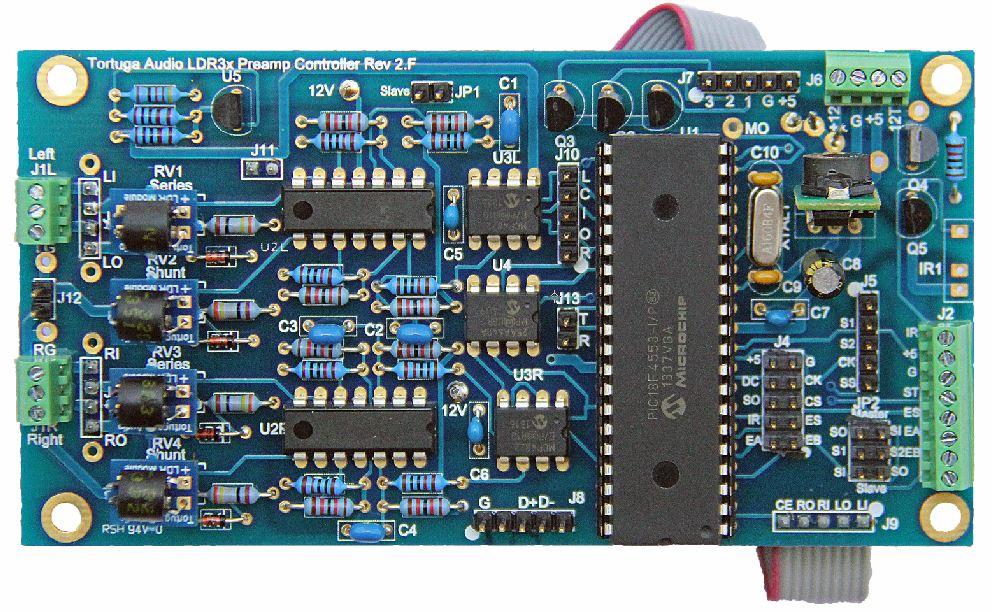 Items specifically not included with the V2 board include:

The V2 is powered by a nominal 12V supply (not included) which is converted to 5V for use within the board. The power drives an embedded PIC microcontroller and its interfaces with a remote control receiver, trigger outputs, USB port, 7-segment display, and most significantly the LDRs themselves which contain light emitting diodes to modulate their vaiable resistance.

The external 12V power supply also directly powers the op amps used on the V2 thus the performance of the V2 does benefit from a superior external power source.

The V2 is classified as a unity gain “passive” preamp device with no active amplification or buffering of the audio signal. That means there is no direct connection to, or manipulation of, the audio signal by a power supply. Despite the sophistication of the V25 design, each audio channel signal “sees” only a voltage divider composed of 2 LDRs in a classic series/shunt L-Pad configuration that emulates a potentiometer.

The V2 introduces numerous new features many of which distinguish the Tortuga Audio LDR preamp controller from all other alternative LDR attenuators in the audio market.

The V2 is equipped with an integrated LDR calibration system which measures each LDR over its operating range and derives correction factors to normalize the behavior of each LDR. In the event one or more LDRs age differently and drift out of calibration, the V2 can normalize each LDR’s attenuation table to bring the unit back into precise calibration. This mitigates dependence on having to use matched sets of LDRs in each build.

LDRs are similar to tubes insofar as they are nonlinear analog devices with a finite life. They have an internal LED light source, they don’t behave exactly the same from one to the next even if the same make/model, their performance characteristics can change over time, some fail early on, and they eventually age and die (although 50,000 hours is a long life). Wouldn’t it be nice to just yank a bad one out, and stick in a nice new one for around $20? Done!

The V2 uses an on-chip USB bootloader which allows software updates to be handled via a USB connection to a PC. Thus, software updates can downloaded from our website out and owners can upload the latest software into their V2 board from their laptop/desktop PC.

The V2 has various control interface headers, solder pads and screw terminals that allow users to implement a complete preamp attenuator and controller. These are each discussed below.

V2.J6 is a 4 position screw terminal located in the top right corner of the board (not circled in board pic).

J2 is a 8 position (only 7 used) , 0.1 inch pitch screw terminal connector located on right end of the LDR3x.V2 board as shown in the image below. Below this image is a typical control wiring diagram showing the IR module, status LED and encoder connections to terminal J2. Further below the diagram is a tabular listing of the the J2  terminal connections. 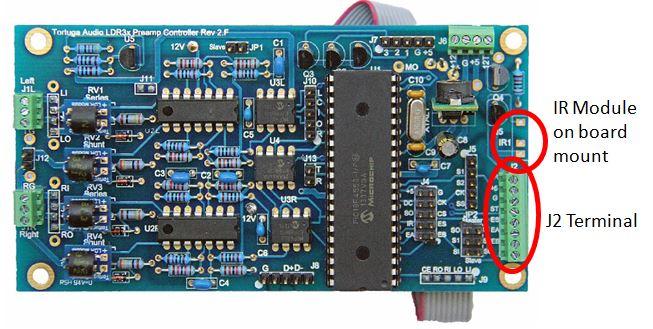 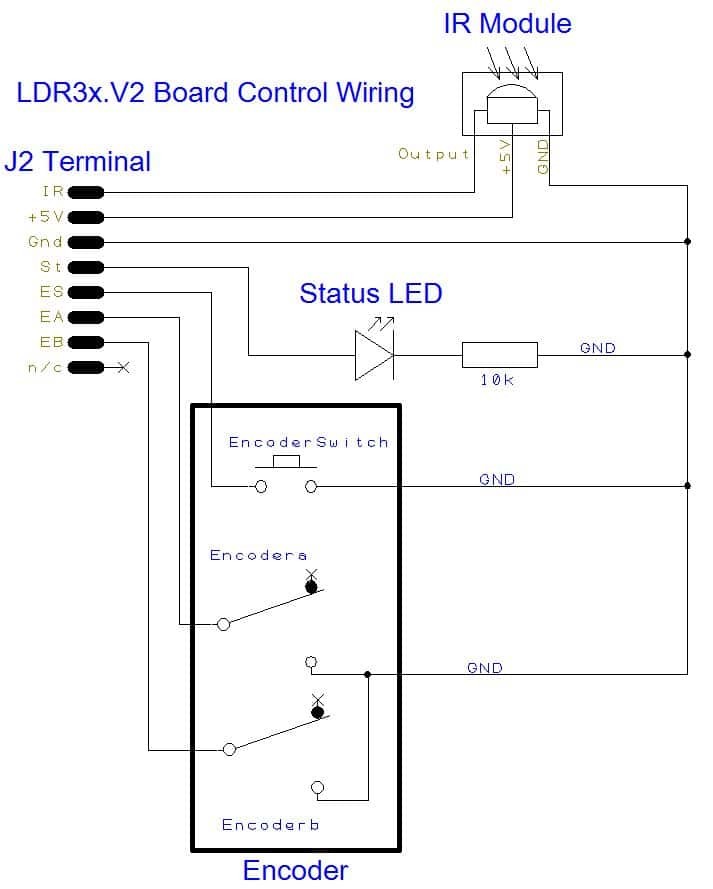 The IR receiver is a 3 wire module that can be mounted externally on a DM1 7-segment display module or soldered directly into the V2 board via the 3 hole board mount located just above the J2 terminal block. The IR receiver module should be oriented such that the “bump” on the receiver is facing out from the board’s edge. Due the offset spacing of the 3 IR receiver legs it’s almost impossible to not get this right.

Carefully note the identity of each of the 3 IR receiver module legs. Incorrect wiring of the IR receiver can quickly destroy the receiver so be very deliberate when connecting the IR Module to the V2 board. If you locate the IR Receiver external to the LDR3x board, pin 1 must be connected to common ground (J2.Gnd), pin 2 must be connected to +5 volt power (J2.5V) and pin 3 must be connected to J2.IR. Connecting wires to an externally mounted IR Module pins is an awkward exercise in soldering. We recommend using our DM1 Display Module which provides a mounting location for the IR Receiver on its circuit board.

Regardless of where you choose to locate the IR Receiver, it must have reasonable line-of-sight access to the handheld IR remote. The most common approach is to have the IR Receiver be “looking out” from the front panel of whatever enclosure you use to house the LDR3x.

J2-ST is an output signal that when connected to an LED provides status information on the V2. The positive lead of the LED (the longer lead) connects to J2-ST which provides +5 V when the LED is turned on. The negative leg of the LED (the shorter lead) connects to common ground (J2-Gnd). In most cases you’ll want to place a resistor in series with the Status LED to limit current (and brightness) through the LED. We recommend a 10-30k resistor but this will ultimately depend on the specifications of your LED and your desired brightness.
The Status LED provides the following information

These 3 inputs are for interfacing the LDR3x.V2 with a rotary ecoder with integral push button switch. The Encoder switch is terminated to J2.ES.  J2.EA and J2.EB the “A” and “B” legs of a rotary encoder. The common leg of the rotary encoder must be connected to electrical ground (J2.Gnd).

The LDR3x was designed and tested to work with the Alps EC11 series of encoders and more specifically the model EC11B15242AF although probably any of the EC11 encoders (or equivalent) will work.

There’s an abundance of info available online regarding audio and grounding. Why? Because poor grounding can bugger up any audio system and it’s all too easy to get it wrong. The most reliable approach to grounding is to use “star grounding”. In simple terms, star grounding means everything that needs to be grounded gets its own dedicated connection to one single common ground point. No daisy-chaining of ground connections. This is clearly illustrated in the diagrams below. Can you spot the daisy-chained violator?

The diagrams below show both the left and right (unbalanced) and the + and – (balanced) audio signal grounds each being individually tied to star ground. These connections  are absolutely essential to the proper functioning of the V2’s calibration feature. Moreover, power ground must also be connected to the same star ground point regardless of whether you’re using an external DC power supply or bringing in a 3 wire AC main to power an internal power supply unit. 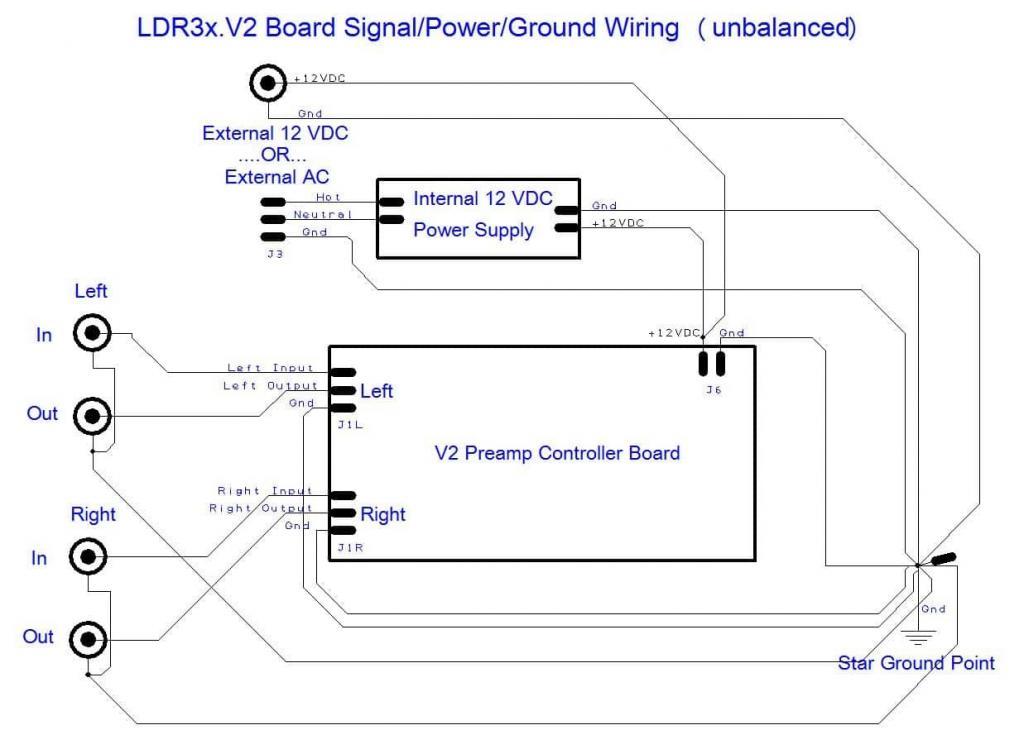 Designating the secondary board (left channel)

All V2 boards operate in Primary mode unless told otherwise.  To designate a V2 board as a Secondary, the pins of jumper JP1 must be connected together. A 2 pin shunt is provided for this. JP1 is circled in red in the second board above.

The V2 Primary conveys necessary information to the Secondary via a 2 wire serial data link and a single wire secondary select command line between the 2 boards. These connections are shown in the red circles and arrows in the picture above. Please pay close attention to notes 1 through 4 in the picture above.  Note that T-J13 on Primary connects to R-J13 on Secondary and likewise R-J13 on Primary connects to T-J13 on Secondary. 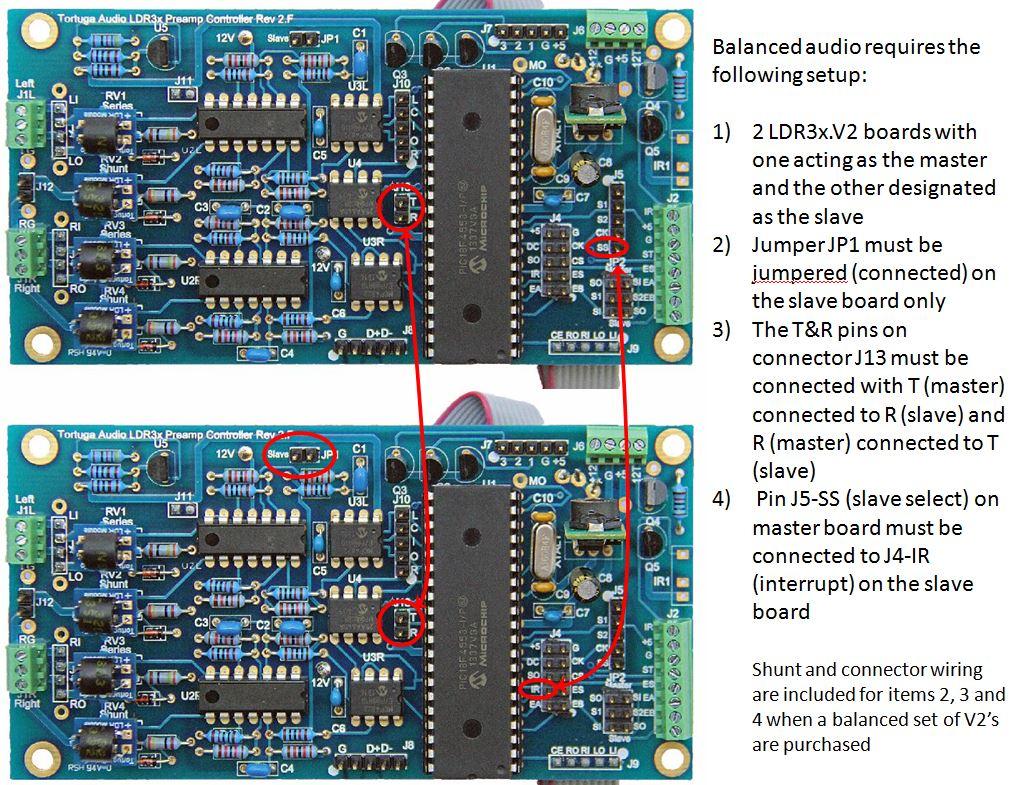 For balanced audio, you will need a pair of V2 boards. The primary board is designated for the right channel and the secondary board handles the left channel. The + channel terminates in J1L and the – channel terminates in J1R. This is arbitrary but it helps to be consistent to both avoid and help diagnose any problems. We recommend the XLR Pin 1 shields be connected together as “pass through”  so that the whole “Pin 1 problem” is dealt with at your source and amp and not also at the preamp.  A great article on the Pin 1 problem can be found here. 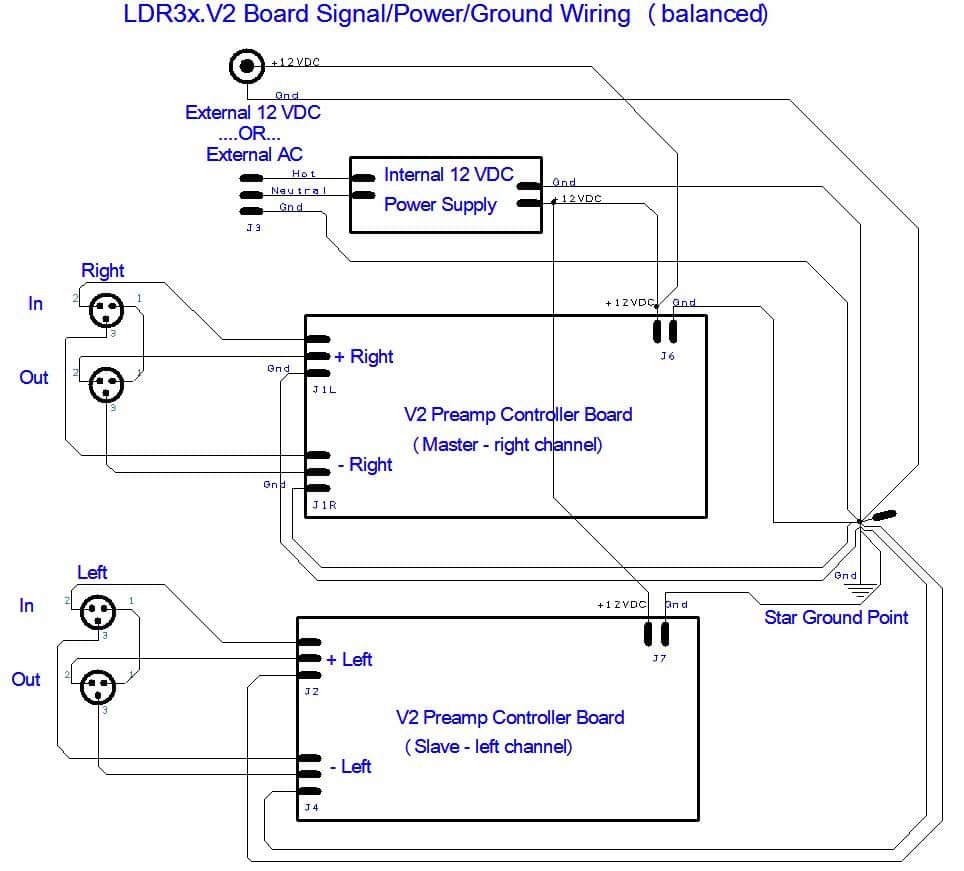 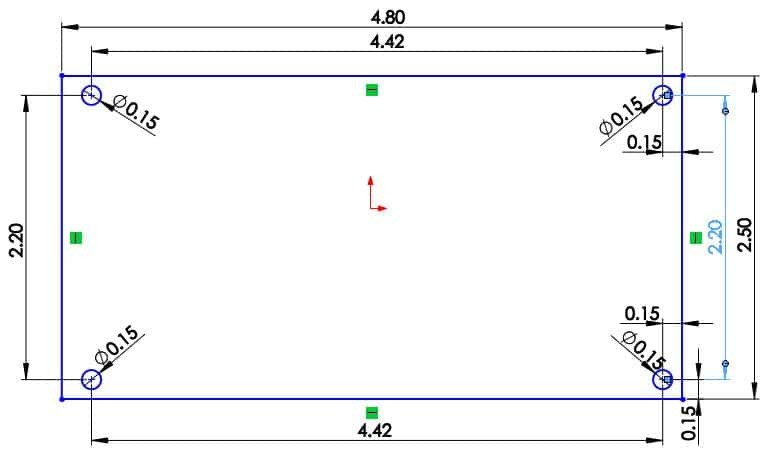