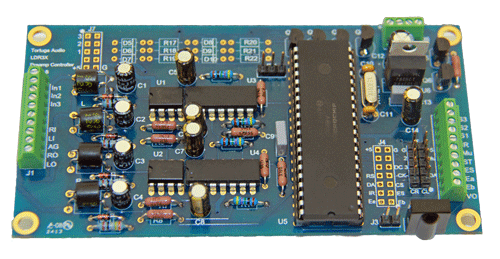 Please note that the V1 is a legacy product and is not longer supported. It has been replaced by the V2 and later the V25 version.

The LDR3x (aka the “V1”) is a preamp controller in the form of a partially populated 2.5 inch by 4.7 inch printed circuit board that is marketed to the do-it-yourself (DIY) audio enthusiast who wishes to build their own preamp.

Insofar as the LDR3x lacks a power supply, controls or enclosure it is neither a complete finished audio premap nor is it a comprehensive kit.

Once connected to an external power source (not included), the LDR3x can accommodate one (1) single-ended audio input without any additional equipment and up to three (3) inputs when interfaced with an external input relay board (not included).

The LDR3x is sold with an uninstalled infrared receiver module that the user can either solder to the LDR3x board or locate external to the board via user provided wiring.

The LDR3x can be controlled by the Tortuga Audio Remote, the Apple Remote and/or Encoder all of which are optional and not included. The LDR3x also has several unique control inputs that are enumerated and explained in sections below.

The LDR3x is part of the Tortuga Audio family of LDRx passive preamps. Please refer to documentation under LDRx Passive Preamplifier for more information that applies equally to the LDR3x.

The LDR3x comes in two versions: a Master and a Slave. The Master operates as a standalone passive preamp for single-ended unbalanced inputs. The Master is also used for balanced audio. The Slave is only used with balanced audio.

The LDR3x can be configured to handle balanced audio using two different approaches: Master/Slave boards or  Dual Master boards. In either case both boards (Master/Slave or Dual Masters) are custom matched to have identical matching attenuation curves.

Alternatively, balanced inputs can be accommodated with a pair of specially matched dual LDR3x Masters. The wiring is the same as with the Master/Slave approach, but each Master Board operates asynchronously from the other (the one doesn’t know what the other is doing). The IR Receivers of both units must have clear “line of sight” to the IR Remote. This approach only works when using a Remote. To initially synchronize  the Dual Masters, ramp both LDR3x units down to zero volume, then raise volume to suit using a single Remote as you would with just a single LDR3x. Both LDR3x units will remain “virtually synchronized” with normal raise/lower volume commands from the Remote. Should they become out of balance, repeat the synchronization process.

J1 is a 10 position, 0.1 inch pitch screw terminal connector for interfacing the LDR3x with the user’s audio inputs and outputs plus optional external input relay selection board.

Terminals J1-In1, J1-In2 and J1-In3 allow the LDR3x to be interfaced with an external input select relay board (not provided/sold by Tortuga Audio). Each of these 3 control signals provides an NPN current sink to ground when activated. They can be activated via Remote and/or via control inputs to J2 including Encoder (see sections Control Inputs & Outputs (J2) below for more details).

Advisory!! – Ordinarily for passives, the audio ground can be a simple pass through as shown. However, with some amps and/or sources, a passive preamp may introduce ground loops with commensurate audible hum/buzz from the speakers. If you experience hum with your LDR3x, you should make sure to connect audio ground (J1-AG) to power ground (J6-G) or better yet connect each separately to a single point chassis ground using star grounding method.

Selecting from multiple inputs can be implemented via a manual double pole rotary switch as shown in the diagram below. Ultimately, the wiring of input and output to the LDR3x is done the same as with a single input except you’re interfacing with the output of the rotary switch instead of the RCA input jacks. 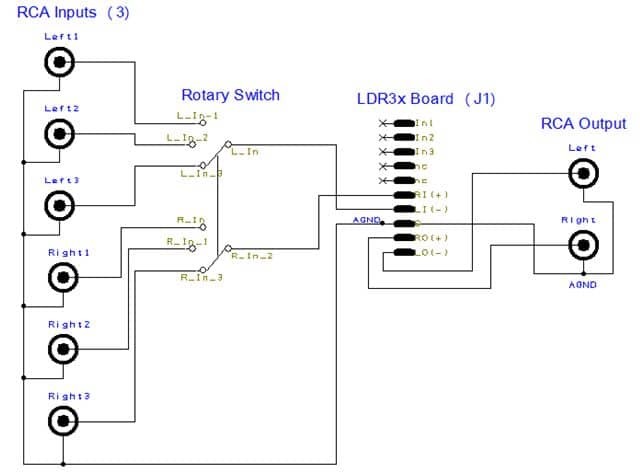 The LDR3x can be interfaced with an external relay board for remote switching of up to 3 input channels as shown below. With up to 3 relays tied to power supply (typically +5V or +12V), the relays are energized (switched to grounded) by the LDR3x board via J1-In1, J1-In2 and J1-In3 respectively. This approach allows you to use the IR Remote, Encoder, or push button inputs to have the LDR3x switch the input relays.

Further detail on the various control options are covered in section  Control Inputs & Output that comes immediately after this section. 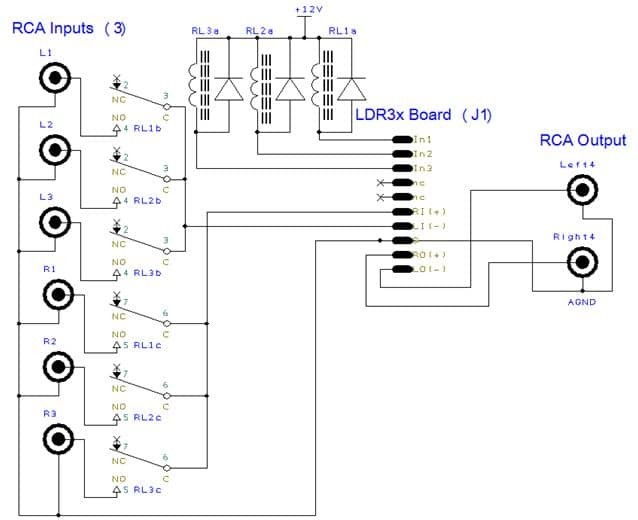 Balanced audio is more complex than unbalanced (single ended). Each balanced channel has 3 (vs. just 2) pin connection; +signal, -signal and ground. The balanced signals except they are 180 degrees out of phase with each other. Balanced audio utilize 3-pin XLR connectors. Depictions of XLR connections can be confusing because the pin numbers look different depending on whether you’re looking at a female (input) or male (output) XLR connection and also depending if you looking at the front or rear of each gender. 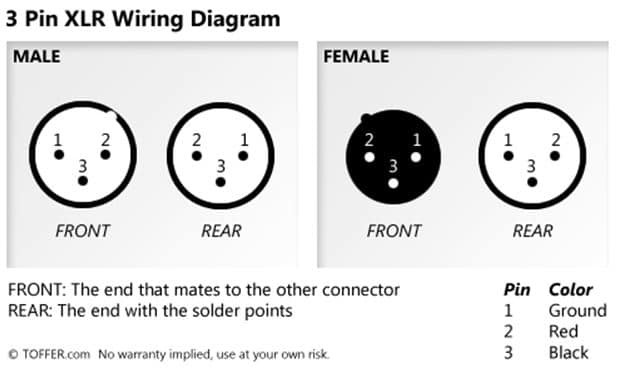 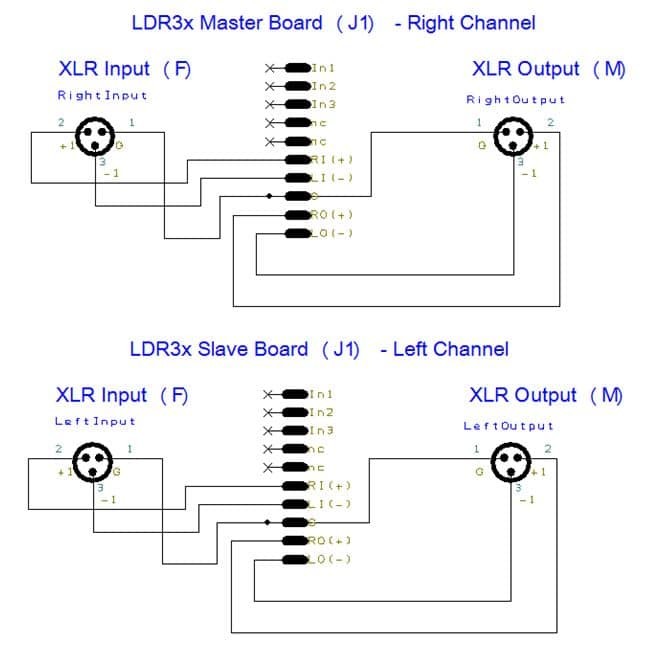 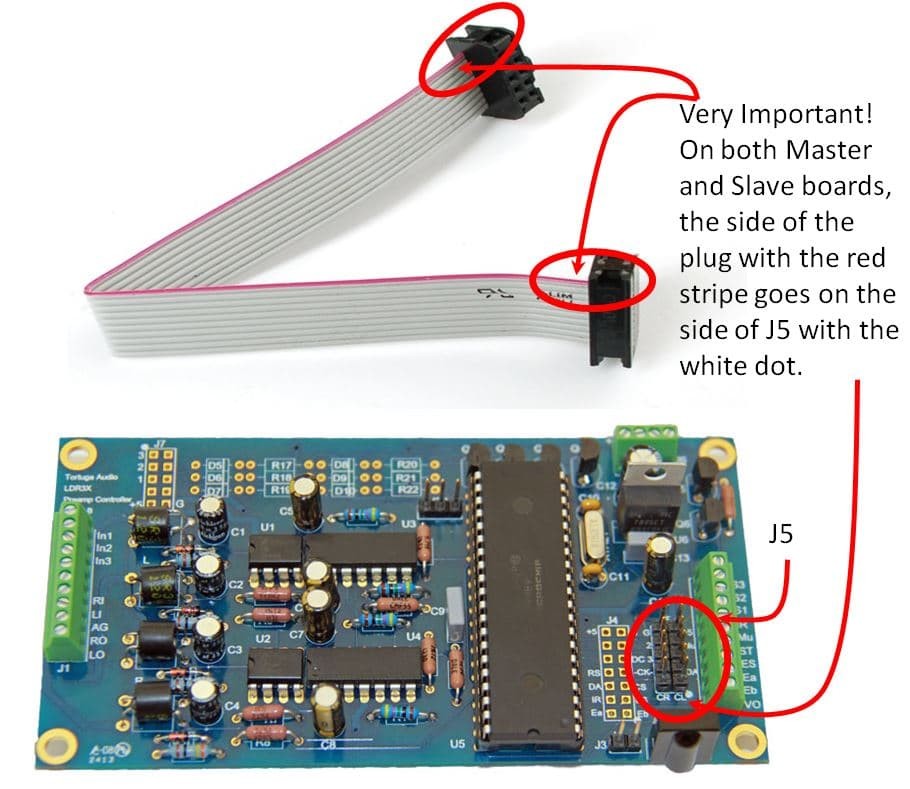 Caution: Incorrectly connecting the J5 headers from Master to Slave board can cause irreversible damage to either/both boards.

J2 is a 10 position , 0.1 inch pitch screw terminal connector for interfacing with user’s control inputs and preamp status output as summarized in the list below and further explained in the following sections.

J2 provides the control interface to control all functions of the LDR3x via  a combination of inputs including push buttons, encoder, IR Receiver, and analog volume pot. It also provides a single status output for driving an LED Status light.

Control via J2 is optional and can be in addition to or in lieu of control via the Tortuga Remote or Apple Remote. Control inputs via J2 and Remote are complimentary and not mutually exclusive with the exception of controlling volume via analog pot input (J2-VO) which disables volume control via both Remote and Encoder (more detail on this exception below).

The diagram below illustrates how to implement all the control interfaces available via J2. Each of these are discussed below. 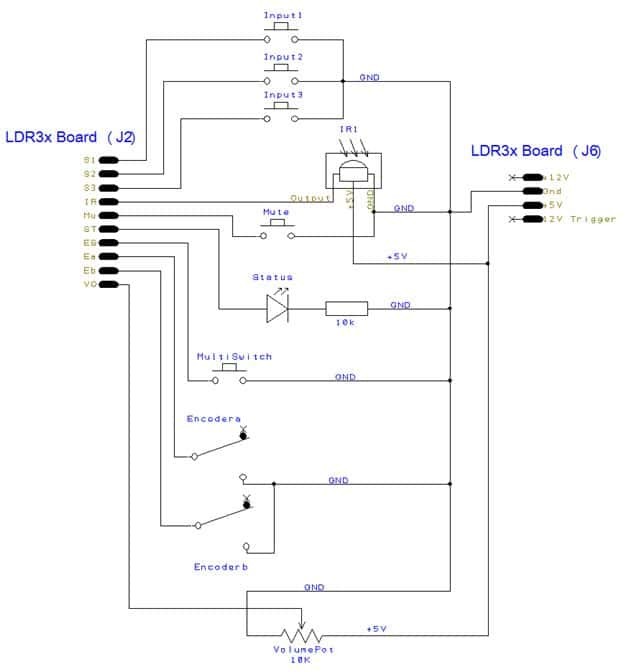 These three push button inputs allow the user to select from up to 3 inputs. As shown in the diagram above the 3 pushbuttons terminate to J2-S1, J2-S2 and J2-S3 respectively. The other leg of each pushbutton is connected to common ground (J6-G). Selecting from multiple inputs requires the LDR3x be interfaced with an appropriate input relay switching board (not currently sold by Tortuga Audio) and that the input relay switching board be interfaced with J1-In1, J1-In2 and J1-In3 respectively. Input selection via S1, S2 and S3 can also be implemented using a 3-way single pole rotary switch. S1, S2 and S3 are prioritized such that if all 3 switches were to be pressed (pulled low to ground) simultaneously, S1 will win. If only S2 and S3 were pressed simultaneously, S2 would win. 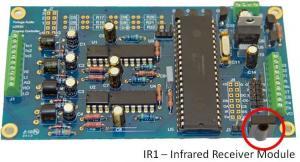 This push button input toggles the Mute/UnMute status of the LDR3x. The other leg of the Mute pushbutton must be connected to common ground (J6-G).

This is only output on terminal J2 and when connected to an LED provides status information on the LDR3x. The positive (+ long) end of the LED connects to J2-ST which provides +5 V when the LED is turned on. The negative (-  short) leg of the LED connects to common ground (J6-G). In most cases you’ll want to place a resistor in series with the Status LED to limit current (and brightness) through the LED. We recommend a 10-30k resistor but this will ultimately depend on the specifications of your LED and your desired brightness.

These 3 inputs are for interfacing the LDR3x with the Encoder. J2-ES is a push button switch multi-purpose switch (Multiswitch) that can act as a power on/off toggle switch, mute/un-mute toggle switch and balance-mode-select switch. While the MultiSwitch input can be  implemented by itself, it’s intended to be implemented in conjunction with the rotary Encoder which has an integral push button switch. J2-Ea and J2-Eb are for connecting the “A” and “B” legs of a rotary encoder. The common leg of the rotary encoder must be connected to common ground (J6-G).

The LDR3x was designed and tested to work with the Alps EC11 series of encoders and more specifically the model EC11B15242AF although probably any of the EC11 encoders (or equivalent) will work. Additional info on the EC11 encoder can be found in the Appendix to this manual.

This input allows the LDR3x volume to be manually controlled using a conventional potentiometer (“pot”).  Connect one leg of the pot to 5 VDC board power via J6-+5 and the other leg of the pot to ground via J6-G. The pot wiper (center terminal) should be tied to the J2-VO terminal. 0V = min volume (muted) and 5V = max volume.  Ideally the pot should have a linear taper since the LDR3x already has its own programmed logarithmic audio taper. Since the pot acts as a voltage divider it can be any nominal resistance but we suggest 5K ohm or greater to limit current draw.

Volume control via a J2-VO pot is enabled via jumper JP1 on the LDR3x board as shown in the picture to the right. Jumpering the 2 right-most pins (or just the 2 pins on boards with only 2 pins) enables this volume control mode.

Remote/Encoder Volume Control Disabled:  Enabling Volume control via a pot input to J2-VO will disable volume control from both the Infrared Remote and Encoder. The LDR3x is NOT sold with its own power supply. The user must supply their own 12 VDC or 5 VDC power source to power the LDR3x.

J6 is a 4 position 0.1 inch pitch screw terminal connector for powering the LDR3x with either 12 VDC or 5 VDC  power and also provides a 12 VDC Trigger output. Each of the 4 connections is explained below.

The power supply ground MUST be connected to J6-G in order for the LDR3x to function properly.

CAUTION: Reversing polarity (i.e. connecting positive supply voltage to J6-G and power supply ground to J6+5 or J6+12) may cause irreparable damage to the LDR3x!

When powered by a 12V DC power source, the LDR3x will generate a switched 12V DC trigger output on terminal J6-12T when the LDR3x is turned on. This output can be used to turn on and turn off other audio components equipped with 12 V triggered inputs. This feature is not operational if the LDR3x is powered from a 5 VDC source.