The TPB.V1 Tube Preamp Buffer (the “Buffer”) is simple to operate insofar as it’s either turned on or turned off and there are no other controls involved aside from the optional ability to control turn on/off via an external 12 volt trigger input. Operation is the same for either the single-ended version (shown in pic below) or the balanced version. 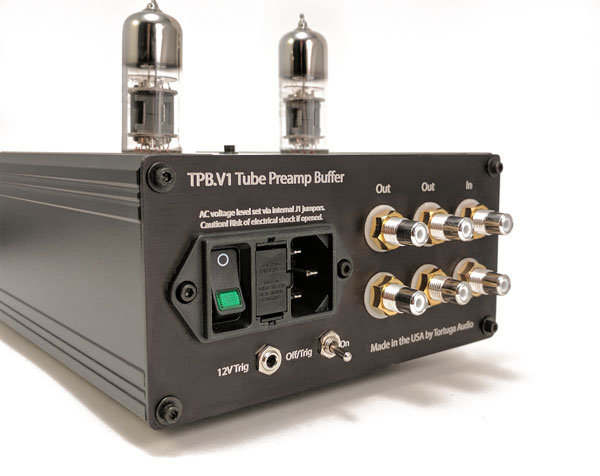 The rear panel has the following elements.

When turned on (either manually or via external trigger) the buffer goes through the following power on sequence:

When turned off the output is immediately muted followed by both the tube heater and plate power being turned off.

The buffer is equipped with a 12 volt trigger input jack. When configured correctly, this trigger input allows the buffer to be turned on by any remote device that generates a nominal 12 volt signal.

To turn the buffer on remotely, make sure the silver toggle switch on the rear panel is set to the OFF/TRIGGER position and then flip the power entry rocker switch located on the rear panel to the on position by pressing the green lens side of rocker switch in. The green light on the rocker switch should light up. The presence of nominal 12 volts on the trigger input will initiate the Power On Sequence described above. When the trigger input voltage is removed or unplugged the buffer will turn off automatically.

With external trigger control you should leave the main power entry rocker switch turned on.