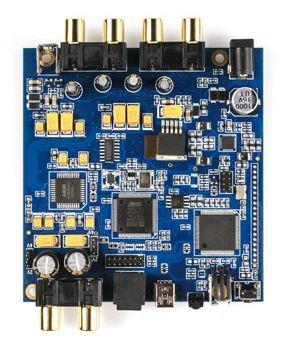 Active DSP Crossovers Are The Future!

Nearly all speakers require crossovers.  Historically crossovers have been passive. From the lowliest 2-way budget box to those 10 foot tall high-end monster cabinets you see in shows and magazines that cost as much as an average house – passive crossovers.

DSP technology is getting more powerful and easier to use and more affordable than ever. DSP use is on the rise and that is nothing but good news!

What is a Crossover and Why Do I Care?

The speaker is arguably the single most important component in your audio system. Sure, other components matter, some more than others, but it’s the speaker that ultimately turns all that voltage and current into the actual sound we love to listen to. 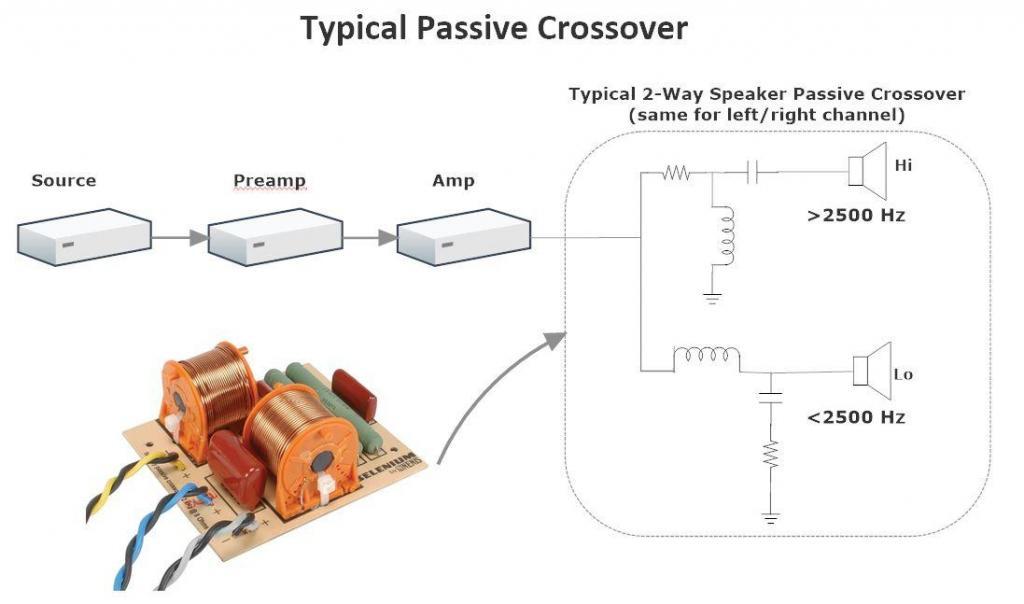 Most speakers use 2 or more audio drivers to cover the full 20-20,000 hertz audible range. Why not just use a single full range driver?  For the simple reason that it’s really really hard to produce the full audible range from a single driver and do it really well including full bass.

With multiple drivers you need to divide the full audible spectrum into frequency sub-ranges and feed each sub-range to a specific driver designed to handle that frequency range. Most speakers are 2-way, fewer are 3-way, and fewer yet are 4-way or higher. “Ways” refers to the number of drivers in each speaker. Low and high pass filters are both used as well as other more specialized filters. Combined, these filters are referred to as the speaker’s “crossover”.

“Passive” means the crossover is driven by the energy (voltage and current) in the audio signal coming from the amplifier. You could say the amplifier does all the work and the filter components “passively” respond.

The Downside of Passive Crossovers

The advantages and disadvantages of passive crossovers are fairly well understood and are summarized in the table below.

If you are a fan of the “if-it-ain’t-broke-don’t-fix-it” philosophy then by all means enjoy your speakers with their passive crossovers. But if you’re looking for ways to materially improve the performance of your audio system then I suggest it’s time to leave passive crossovers behind and make the move to active crossovers.

If you’re adapting your existing speakers to active crossovers you will definitely spend some more money. On the other hand if you’re building your own speakers you can avoid pricey passive crossover components altogether.

Cost more than what exactly?  What I’m suggesting is that before you spend another nickel on some exotic tweak, pricier cables, wooden blocks, or even a new set of speakers, consider making the move to active crossovers first. Keep your existing speakers, adapt them to an active crossover,  and you will likely be pleasantly surprised at the improvement in their performance.

The primary additional costs for a DSP crossover is the DSP crossover itself plus a second 2-channel amplifier. Of course there are also numerous additional interconnect cables required. Like so many things in high performance audio you can spend a little or a whole lot. I submit that DSP need not cost an arm and a leg. For example a $200 DSP from miniDSP does an outstanding job.

How Do Active DSP Crossovers Work? 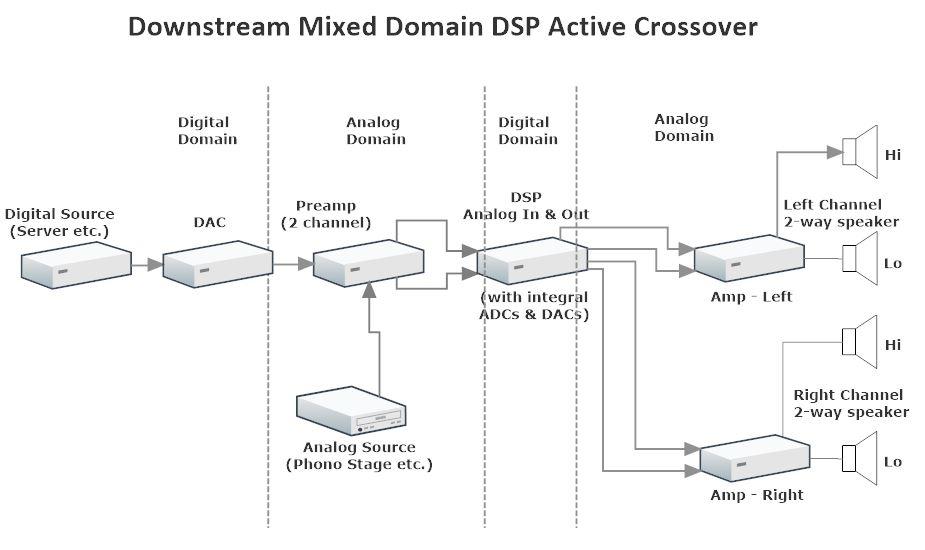 The figure above shows a typical active DSP crossover for a 2-way speaker. Here we have a conventional 2-channel preamp feeding into a DSP crossover. The crossover splits the left and right channel audio signals into separate “hi” and “lo” frequency signals for both the left and the right channels resulting in  4 analog signals each of which needs its own amplification.

With active crossovers the only thing each amplifier “sees” is a single driver with a relative simple impedance characteristic. All things being equal, your audio system WILL sound better with an active crossover in a one-amp-per-driver configuration.

How Many DAC Channels did You Say?

Like the name says, DSPs are in fact “digital”. They perform the crossover process in the digital domain using specialized high-speed processors and lots of cool math. This means the incoming 2 channel audio signals must first be converted to digital via analog-to-digital converters (ADCs), then processed computationally into 4 channels, and finally converted back into 4 analog channels via 4 digital-to-analog converters (DACs).

Note that if your source is mostly digital to begin with you probably already have one 2-channel DAC in your system. This means you now have not only a 2-channel ADC in your system, you actually have a total of 6 (SIX!)  DAC channels as well.

An alternative approach is shown in the diagrams below. Here we’ve moved the DSP upstream into the digital domain where it takes its input directly from your digital source. The DSP also accepts an analog line input such as from a Phono Preamp.

The first diagram uses the 4 DAC channels embedded in the DSP to generate the 4 analog outputs. In the second diagram an external pair of dedicated 2-channel external DACs are used instead and the DSP operates entirely in the digital domain.

With this approach we’ve eliminated the ADC altogether and we’ve gone from 6 DAC channels to the minimum 4 required.

The challenge with this simplified system is now you need a 4 channel analog preamp. 4 channel preamps are are not common.

Tortuga Audio is considering offering a 4 channel LDR preamp for this type of DSP crossover application. This would be an ideal application for our latest V25 Preamp Controller. 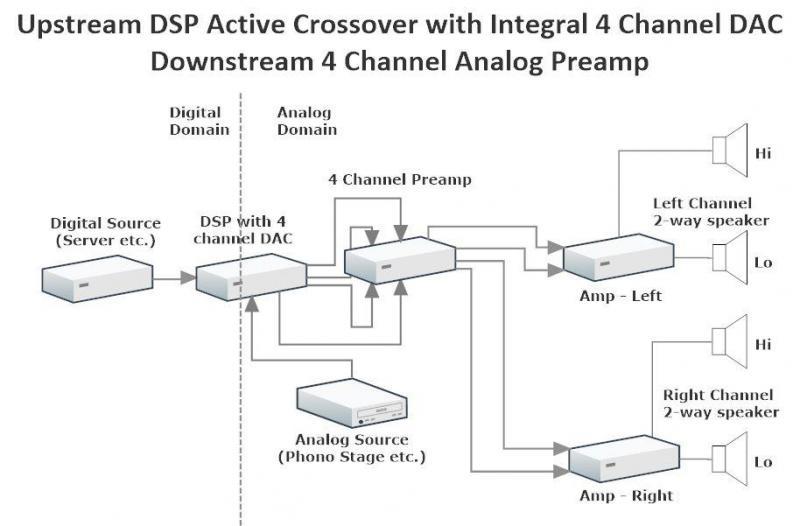 The figure below is the same as above except 2 dedicated external DACs are used instead of using the 4 DAC channels of the DSP. 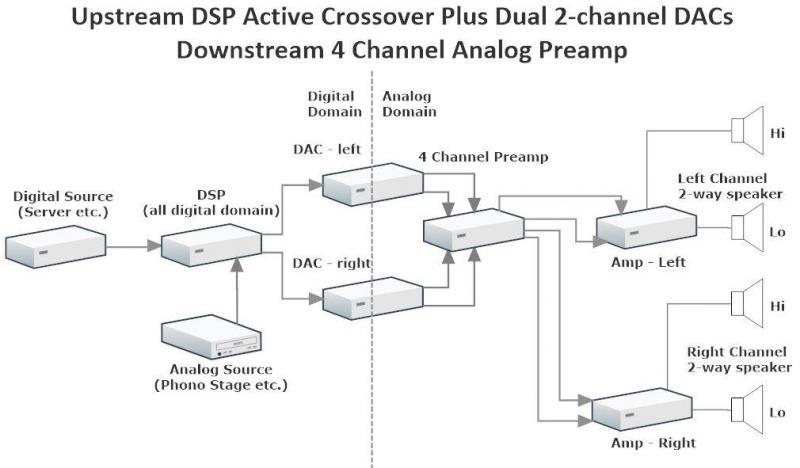 Regarding the active x-over system, it is incomparably better than passive solution due to many factors – from distortion, to linearity, to having amplifier’s direct control over driver movements – to name just a few…

Regarding the ADC/DAC and all the digital signal processing – I am wondering if you compared your digital solution with analogue one? Something like a good quality op-amp in unity gain with a couple of resistors and caps, all tuned to desired filtering frequency and slope. That should be much more simple than all the digital conversion and processing. Of course one loses possibility to easily change settings, but x-over design should anyway be a one-time job as a part of loudspeaker design. It would be interesting to hear your thoughts on this! Thanks 🙂

I’ve no doubt that a good analog active crossover will provide excellent performance but after looking high and low it’s difficult to find definitive information documenting that an active analog (op amps etc.) is inherently better sounding than a well made DSP crossover although I’m sure many believe this to be true. Where DSP leaves analog behind is in the ease of customizing the filtering. Using a proper MIC and decent software like the Room Eq Wizard (https://www.roomeqwizard.com/) you can take the room correction results data files and incorporate them directly into the DSP with fabulous results. You’d be hard pressed to do anything like that with an analog crossover.

If you’re dead set against a DSP I would still recommend using a DSP to design the analog crossover. Determine all the parameters/filters via DSP and then implement a quasi-fixed analog equivalent.

On the other hand notable audio/speaker design gurus like Seigfried Linkwist has abandoned his analog crossovers for flexible low cost miniDSPs alternative having concluded through testing and listening that there’s no penalty for using DSP if not the opposite. Seigfried is a highly analytical and test oriented engineer’s engineer = a true audio expert.

The topic of digital vs. analog volume control comes up often enough. Understandably. The unavoidable reality with digital volume control is you sacrifice dynamic range and resolution. Digital volume control is achieved by cutting off bits. If you start with say a 16 bit system (where maybe only 12-14 bits are realistically being used meaningfully) you quickly get down into the single digit bit range. Better if you start with 24 bits but then you’re mucking about with up-sampling and other manipulation.

Every instance to date where one of our customers tried our analog LDR volume control against their existing digital volume control (usually built-in to their DAC) the analog LDR won out on sound quality. For the foreseeable future I see volume control via analog attenuation (voltage reduction) winning out over digital bit chopping.

I share you general concern over adding another digital processor into an analog signal path (ADC/DAC) . What I’ve experience so far in working with MiniDSP digital crossovers is the benefits outweigh the potential concerns. A tough pill to swallow for any analog purist but the proof is in the listening and I’m enjoying it A LOT!

Thanks! Your explanation about digital volume control makes perfect sense, and it is good to add logic and knowledge to physical observations.

Very interesting solution, something to explore further. I remember Accuphase used to have digital crossovers, but they cost fortune. Currently I am working on an analogue active crossover, and benefits compared to a passive version are tremendous, while the cost is more-less the same. Digital version is even more interesting, although I am not very enthusiastic about converting analogue source into digital. One question – if there is already signal processing in digital domain, could it be more practical to also include the volume control in the digital domain? This could make LDR redundant and significantly cust the cost of the entire set-up.